Today I wanna take a few minutes to talk about the 2 shows on TV that have me going crazy. First up is Fox networks Empire. The first season just recently ended and all I can say is OMG!!! I love the cast. I love the storyline. I love that it got picked up for a second season. I love, love, love the music. Seriously, I actually went to FYE and bought the soundtrack. If you have not seen any of this show please make the time to watch. The show  is all about Empire records which belongs to Lucious Lyon (Terrence Howard). Lucious is trying to decide which one of his three sons will rule the "empire" and all kinds family drama ensues. His ex-wife Cookie ( Taraji P. Henson) has just gotten out of jail after 17 years and just wants to bond with her kids and get what is owed to her.  The family is rounded out by Hakeem ( Bryshere Gray), Jamal (Jussie Smollett), and Andre (Trai Byers). I don't want to give away too many spoilers but the two youngest sons are both musically gifted between rap and r&b, while the oldest son is the brains behind taking the label and making it a publically traded company. 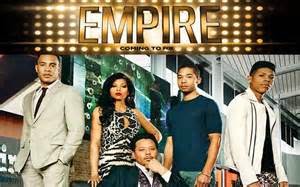 There are so many guest appearances on this show it is amazing. Like I said it is a must watch especially for music fans. You can head over to www.fox.com and watch all episodes for free.

Another show that is airing currently is Lip Sync Battle hosted by LL Cool J with Chrissy Teigen aka: Mrs. John Legend.  This is on Spike network ( www.spike.com/shows/lip-sync-battle). It airs on Thursdays 10/9C. You get to watch your favorite celebs go head to head in the time honored tradition of the lip sync battle. There are 2 rounds and the winner gets bragging rights as well as a pretty sweet championship belt. So far there have been 3 episodes and they did not disappoint. Battle 1: The Rock aka: Dwayne Johnson vs. Jimmy Fallon. Battle 2: John Legend vs. Common. Battle 3: Anne Hathaway vs. Emily Blunt. I would be hard pressed to choose a favorite battle at this point because they are just that funny. This week features John Krasinski vs. Anna Kendrick and I can not wait.
Posted by April at 9:57 PM