Review of book 2 in the Redhead series by Alice Clayton 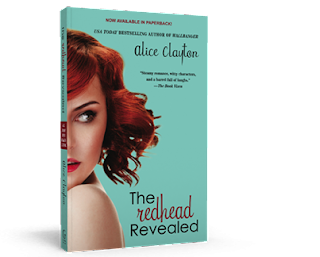 Book 2 in the "Redhead" series is The Redhead Revealed .   I just finished reading it a few days ago and had to share.
The new book opens with our love struck duo on 2 different coasts pursuing their acting dreams. Grace has been given the lead roll in an off Broadway musical with the hopes that it gets picked up for several runs. The director just happens to be an old college flame. Grace begins to realize that Jack is a rising star on the verge of being the next "it" boy at the ripe old age of 24. Not to mention he may soon be wearing the title of "sexiest man alive" and dodging the groupies that come with it. Long distance relationships are hard enough as it is but add to that 2 busy rising stars, a bossy manager/bff, and a couple of old loves looking to rekindle and you have a recipe for disaster. Grace is still having issues with the 9 year age difference and horrible tabloid comments when she lets her "crazy" get the best of her on the night of Jack's big movie premier.
Jack is on the west coast seriously missing his Gracie and the newly formed relationship they've built.  He is getting more frustrated by the day the closer he gets to opening night. He hates their relationship consists of lots and lots of sexting and late night phone calls. He hates the paparazzi
and his new sex symbol status that has women hanging around his apartment. He even hires a bodyguard and uses aliases when traveling. The thing he hates the most is keeping his relationship with Grace secret to protect his image and their privacy.
As the story unfolds you learn more about Grace's past with her director Michael. You also get to see how important this break is for her career and how very stressful being in the public eye can be.  I was rooting for this couple from page 1 and can't wait to get started on book 3, The Redhead Plays Her Hand.  Did I mention the nonstop humor and sexual chemistry that oozes from this couple? So worth the read. Feel free to read up on it at any of these sites: http://aliceclayton.com/  , www.goodreads.com, or www.amazon.com