So to continue with my attempt to add a little scary into my month I forced the boyfriend to take me on a date night to watch Crimson Peak in exchange I agreed to go watch Krampus ( I am already terrified thinking about it). The trailers for the movie had me super excited to watch and I love the cast that was chosen.The trailer up above that comes from Universal was the one that had me hooked.

Guillermo Del Toro is the director and I have loved most of his stuff including Pacific Rim. Both movies have starred the amazing Charlie Hunnam ( Jax from SOA if you don't recognize the name). The film also stars Tom Hiddleston (Loki from Avengers), Jessica Chastain(The Help and Interstellar), and Mia Wasikowska (Alice from Tim Burton's Alice in Wonderland). The costumes and settings for the movie were perfect. However, that is about the most positive thing I can say. The plot itself was not bad it just didn't live up to all the hype and scariness promised by the trailers.

Here's the breakdown with some major Spoilers: Edith Cushing (Wasikowska) is an aspiring writer having trouble getting published in her hometown of Buffalo, NY. She appears first as a little girl in the movie attending the funeral of her mother. Later the ghost of the mother appears to her with a warning..."Beware of Crimson Peak". Is this what inspires young Edith to grow up and write ghost stories? Obviously.  Her father has lots of money and is visited by Sir Thomas Sharpe (Hiddleston), a young man from England looking for some investors in his clay mining endeavor. Mr. Cushing promptly turns him down but not before the chance encounter between his daughter and Sharpe. Love is in the air between these two right away. Edith's childhood friend, Dr. Alan McMichael (Hunnam) also throws his hat in the ring for young Edith's heart even as his own sister is hoping to land Sir Thomas. Sir Thomas did not come to visit alone. He brought his sister, Lady Lucille Sharpe (Chastain), with him and the two seem to have a difference of opinion on whether Edith is right for their family.

Mr. Cushing has a private investigator look for dirt on the Sharpe pair before Sir Thomas has a chance to ask Edith to be his wife. This results in a private meeting, a bribe, a broken heart, and the death of Mr. Cushing. Edith turns to Sir Thomas for support during this time and the are married. The story then shifts to the very Gothic mansion owned by the Sharpe family.  While Edith is swept away in learning about her new husband and sister-in- law. Alan is back home trying to piece together what really happened to Edith's father.

It becomes clear as soon as Edith arrives at her new home that Lady Lucille is anything but welcoming and that the house is filled with dark secrets and ghosts. Edith begins communicating with the spirits in the house who are all trying to warn her and then her own mother's message suddenly makes sense. Edith realizes that there is a very unnatural relationship between her husband and his sister at the same time Alan is on his way to rescue her after having discovered the truth on his own.
The ending to the movie was a classic good vs. evil with Edith being the survivor.

I did enjoy the movie but like I said earlier, I thought it was going to be more horror and less fantasy.  However, if you watch this looking for a Gothic romance it delivers big time! I thought the acting was amazing and the presentation was done extremely well.  The company that handled the PR for this film was dynamic because that was what made us all want to rush to see it. I would give this movie a 3 out of 5 stars. I have recommended the film to my friends because it has a very Edgar Allan Poe quality to it and I love Poe.
Posted by April at 9:26 AM No comments: 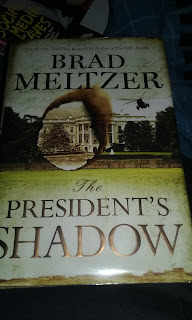 The month of October brings 2 themes out in full force. The first is that it is Breast Cancer Awareness month.  I fully support this cause all year long not just in October. This year I have seen pink everywhere including a local grocer who only uses pink plastic bags with the ribbon on it.  I love that so many people are supportive of this.  The second theme in full force is of course Halloween.  Anyone who knows me will tell you that I do not watch or do anything truly scary. I am a punk and have no shame in admitting this fact.  However, I do like a little darkness and thriller from time to time. I chose to read a few authors who are known for thrillers and some slight gore. This is how I am celebrating the month.

The picture up top is one I took of the first book on my thriller list for the month.  The President's Shadow by Brad Meltzer.  If you are not familiar with the author, you should be. He is amazing and he even has his own shows on TV. He is a huge historian /government buff and I love a good conspiracy theory.  This book is all about 2 secret rings/organizations that are based in the US governement and have been for years. One group is to protect the president and US secrets the other is basically to take the president out but as with anything it is not this black and white.  The President is being targeted by a mysterious person or group and have left an arm buried on the White House grounds.  A well known archivist gets called in to help solve the crime as he may have a personal connection to the individuals responsible.  I don't want to give too much of the book away but this book has it all. There are hidden government meeting places, safe houses, secret rooms, secret and mysterious groups, and even military mysteries.  I loved this book and could not put it down. There were a few borderline gory moments but nothing too bad. I would absolutely give this book 5 out of  5 stars.

The next author I chose was Dean Koontz. I have a love-hate relationship with his books. I don't read his stuff very often because I am not usually interested in the topics. A friend of mine at work was reading 2 of Koontz's books and was so engrossed in them that I thought I would give them a try.  The first is Watchers.  All I can say is WOW!!! I finished this one about 3 days ago and I am still buggin' out a bit.  The story involves a dog named Einstein who was a test tub puppy genetically bred to be just as smart as a human. He can communicate very effectively by using scrabble pieces or picture messages. Th government was looking to create a golden retriever with the ability to appear like a normal canine but could be given away to our enemies and debriefed every so often to provide the US with intel.  The other genetically engineered creation, known as The Outsider, was to be used as a silent and deadly killing machine during war.  Both are altered and both want to be free from the laboratory that they lived in. One is benevolent and the other is extremely violent. They also have some sort of telekinetic bond. Einstein is trying to find a good home to lay low in while he hides from the government that will try to keep him in captivity and The Outsider wants to kill everyone especially the dog.The story is all about the way these animals think and affect the lives of those around them and the search to find and contain the threat that they pose should society find out about their existence. This book was so amazing. There were some very gory scenes but they were neccesary to the story line. This gave me the chills and I loved every minute of it.

The second Dean Koontz book is one I just started reading called Winter Moon. I can't really say much about it at this point other than it is about a mysterious "watcher in the woods" and it's full of death and violence. This is bound to be just as suspenseful as the book jacket promises. This one has some supernatural elements to it. I will post an update on it once I have finished reading it.