We Should Hang Out Sometime - Review 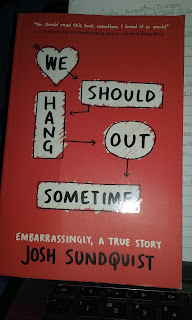 I actually first found out about this book from a women's magazine I subscribe to.  It was on a list of "must read books"  and the little blurb describing it caught my attention.  I knew nothing about the author or his story but all I can say is ...wow. This book made me laugh all through out it.  Josh has such a unique, straight forward way of looking at life that is pretty refreshing.  The story is about his journey to finding out why he has never had a girlfriend or much luck at all with women.  He is a cancer survivor. He was diagnosed  when he was very young and as a result ended up an amputee.  He breaks the book up by  covering each girl that he had wanted a relationship with and a little history about their time together. He forms a hypothesis on what he feels could have caused the demise of the "near" relationship and contacts each girl to see what they believed went wrong.  He does end up coming to a conclusion based on all his findings and the irony is that Josh and his view of himself is what killed any potential relationships.  I loved reading along and seeing the world through his eyes. His sense of humor prevented this from what could have potentially been a sad novel. His  ability to embrace what makes him different physically and turn it into something so positive is truly inspiring. Josh is actually a Paralympic ski racer, motivational speaker, a member of the US National Amputee Soccer Team, and a YouTube contributor.  I love watching his various videos because he is funny and not afraid to just be himself. This is a book that anyone would be able to relate to on some level.
You can check out more on Josh Sundquist and his other books at http://www.JoshSundquist.com or on Facebook, Twitter, or YouTube.
Posted by April at 11:13 AM