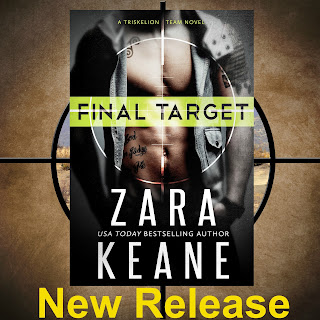 His last hit turns out to be his first love.....
As a final job for his mob boss uncle, Lar Delaney agrees to eliminate one last target. Through the crosshairs of his sniper rifle, he realizes that his target is a former girlfriend-a woman who supposedly died five years previously.
Moira Collins is an intelligence agent whose cover has been shot to smithereens.  When she finds herself on the wrong side of an assassin's rifle, she's appalled to recognize the only mark she ever let herself fall in love with.


I was happy I got a spot on this book tour because I was really looking forward to an ARC of this newest book by author Zara Keane.  I have a friend who really enjoyed some of her other stuff and so I was eager to check her out myself.   This story almost reminded me of the season of Sons of Anarchy that revolved around dealings with the IRA.  I mean this in a good way. I loved SOA and that just made me fall in love with these characters even more.  I love the fact that the alpha character is actually a real bad boy!  I mean he is a hitman and a member of the Dublin Mafia.  I read books all the time where the "Bad Boy "turns out to be a big softie who was misunderstood. These are great to read also but every so often a girl wants something a little different.  I like that Moira is a tough, intelligent, and focused heroine.   The secondary characters in the story are pretty interesting themselves and I look forward to learning more abut them.
Moira has a great background story.  She survived a family tragedy that placed her in the witness relocation program.  She grows up thinking everyone else in her family is dead and it sparks a fire in her to right the injustices dealt out by the mafia.  She ends up as a top intelligence agent and spends a lot of time under various identities while trying to infiltrate the ranks to bring them down.  While she is in Boston undercover she meets Lar and they get involved in a serious relationship until the night he belives she has died.  She never quite gets over her feelings for him or they way she had to leave him.
Lar has been able to gradually move past the pain of losing the one woman he loved more than anything and is looking to get out from underneath his Uncle Frank's choke hold and go into business with his cousin.  His uncle naturally wants something in exchange for releasing Lar from the "family business".  Frank gives Lar a folder with a remaining member of a family he thought he had taken down several years before.  He wants Lar to kill the daughter of his rival.  Imagine Lar's surprise when he gets to the end of the file and sees the picture and realizes there may be a chance that this Genevieve McEllroy may be the very same Moira Collins that he had to bury.
This book had an opening scene that had me hooked right from the start and the action, intrigue and underworld activities kept me interested.  I would recommend this book to anyone. It is actually a book I plan on giving 5 stars to on Goodreads.  You can grab a copy on Amazon, Kobo, Apple, or  Barnes and Noble. 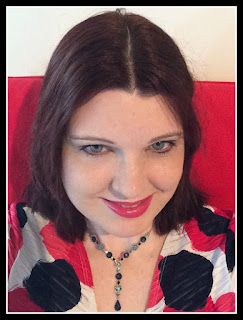 Zara Keane grew up in Dublin, Ireland, but spent her summers in a small town very similar to Bellybeg, the fictitious town where she sets her Irish contemporary romances. She currently lives in Switzerland with her family.  When she's not writing or wrestling small people, she drinks far too much coffee, and tries ( with occasional success) to resist the call of Swiss chocolate.    http://zarakeane.com