Shrek Jr the Musical Weekend at our house 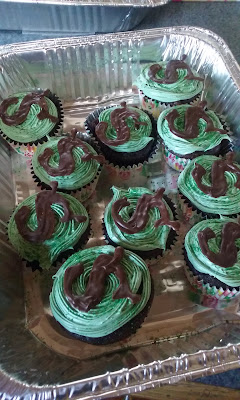 So this post may seem a little random since I mostly discuss books, movies, or shows.  My daughter and I were watching some Netflix last year and stumbled upon a show called Shrek Jr the Musical.  We love all things Shrek so we thought we would give it a try.  It was so funny.  The music was just as catchy as the DreamWorks film.  Turns out this was a Broadway musical based on the actual movie with some minor adjustments. So imagine our surprise when, this Fall, the drama club director at my daughter's school mentioned that this was the exact same play they were putting on for the Spring musical.  If you have not seen the video of the Broadway production you are missing out.

I signed up to not only work the concession stand during one of the performances but to also bake something for them to sell.  I had noticed at previous plays that the stuff baked is pretty standard.  The kids actually have a "Bake Day" where they get together at one of the director's house and bake their little hearts out.  They always have a few types of cookies, some brownies, maybe some muffins, and they sell chips and water too.  I thought I would make something Shrek-themed and appealing to the little ones that came to the play.  I made cupcakes.  I admit my daughter and I love to watch the Food Network and the Cooking Channel so naturally I imagined myself as a contestant on Cupcake Wars.  Lol. Sometimes I wish I was making a YouTube video so the resulting ridiculousness could be shared.  I spent 2 weeks trying various cupcake flavors, frostings, and designs out.  I wanted something green, eye-appealing, and yummy.  This may be a great time to mention that I actually am not a cupcake fan.   I know I'm weird.  It's not that I hate them just that I am not a huge fan of cake in general not even in smaller sizes.  I think I actually ate 2 cupcakes out of the 100+ that I made.  Thank goodness the rest of my house loves them.  The final decision was not the fondant covered masterpiece I had envisioned (note: There was also an episode of Cake Wars that aired during this time that was Shrek themed.....it almost ruined me) but instead it was a chocolate cupcake filled and covered with an almond flavored, "Shrek "green whipped frosting.  I then may have went overboard with the green crystals I sprinkled on.  The final touch was the chocolate "S" I put on top.  They were a labor of love.  I wanted the S to match the one on all the programs and advertisements with the little Shrek ears on it.  I had only one copy of the invitation with it on so I had to keep moving it under the wax paper as I was tracing over it with the melted chocolate. I was literally covered in chocolate when I was done but it was worth the effort once I had frozen them for a few hours and put them on the cupcakes.  I think they turned out pretty good because they certainly sold out fast.  I am however the worst Mom in the world because I never saved one for my own little actress. Nothing says loving like a "hangry" teenager after a 2 hr musical when she discovers her Mom never saved her one.