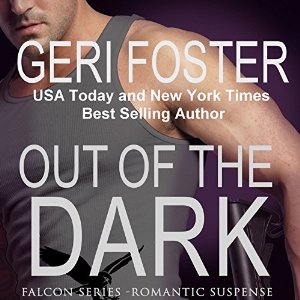 After a Russian mission goes south, Falcon Securities agent John "Mac" McKinsey is stranded with assassins on his trail. His boss arranges for him to hitch a ride with the corporate attorney Emily Richards, who is in Russia as a mediator.
Emily Richards wants only to return home then on to a peaceful vacation with her best friend. When armed men invade her hotel room minutes after Mac arrives, Emily is forced to depend on Mac to stay alive. Anger that Mac has entangled her in a life or death struggle quickly turns to fear when the men pursuing them call her by name.
Together Mac and Emily engage in a tumultuous ride to escape with their lives and capture a crazed bomber and a vindictive drug lord. More difficult is tearing down their own emotional walls. Can they succeed and admit love is the most precious thing in life?


My Thoughts on Book 1.....
I actually was given a code to get a complimentary copy of Out of the Dark to listen to. I got my copy from Audible and it is the first time I have reviewed an audiobook. I am an avid reader but sometimes I find myself reading the same genre for weeks at a time. This was a welcome departure from the last several regency romances I have been binge reading. It was a fast paced, thrilling story. There is a pretty good romance story here but it is so well mixed with the intrigue and danger that it is not the main focus. I do have to state here that I agreed to give an unbiased review and this was not one of the best military romances I have read. The main characters Emily and "Mac" are kinda cliche and borderline on cheesy. I actually liked the secondary characters a bit better. The story starts in Russia and ends in Texas which is pretty predictable. The ending was not my favorite at all. It was the worst....that being said I now find myself needing to read the next book to see if it gets any better. The writing style is pretty good. I am looking marginally forward to book 2. I plan to give this a 3 star rating on Goodreads.

New York Times and USA Today best-selling author Geri Foster brings you the second book in the Falcon Securities series.
Falcon Securities agent Brody Hawke sees the world from a tilted angle. His best friend, A. J., who saved Brody's life, is captured and diplomats are getting nowhere in his rescue. Brody takes over even though he knows his impetuous actions will ruin his career. He is not willing to abandon his friend to torture in a Mexican jungle hacienda. What's Brody's plan? Kidnap a CIA agent and use her as bait.
CIA agent Kate Stone is fighting for her job and sanity after a failed attack in Iraq. She knows the truth is out there somewhere, but can't prove it. Her life is torn apart when Brody kidnaps her. When she and Brody reach A.J., they learn the situation is more serious and far-reaching than they'd imagined. Brody, Kate, and Falcon Securities must rescue A.J. and stop the assassination of the president of the United States.
Can Brody and Kate find true love in the mist of all the chaos? And can Brody accept what Kate revels about his past so he can finally reach out for a love of his own?

Falcon Securities Agent Tony Archuletta has lost his memory and a CIA operative is being held captive by a lethal group of terrorists out to destroy America. For Tony to pull off a mission this delicate and complex, he must have his memory as well as every weapon at his disposal.
Abby Williams is a reporter who happens to be at the wrong place at the right time. One of Falcon's agents is being held in the notorious Lubyanka Prison where experimental drugs were used to make him break under integration. The agent is a man Abby has a painful history with. A man who stole her heart and left her.
Can Tony and Abby race against time to save the CIA operative? Will Tony regain his memory only to learn that she is the only woman he'd ever loved and the only person he ever feared? Does love win this battle? Or do these two souls who are meant to be together take the safe road and part with just a handful of memories?