My Review on Hellion by Rosalie Stanton 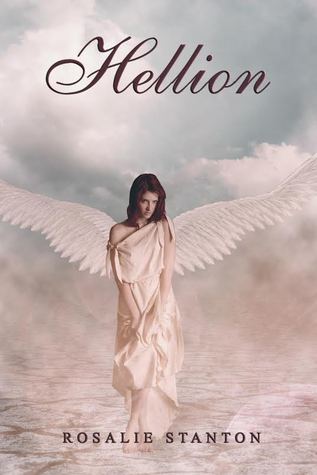 **I received a free copy of this book in exchange for an honest review.**  OMG!! I had never read anything before from Rosalie Stanton and was pretty interested in the concept behind this story.  Sera is an angel who is given a long term assignment on Earth. The job:  Grow up pretending to be a human all while protecting Colin  ( a demon who has been touched by God).  The pros: She gets to have a great life here on Earth and Colin is her best friend.  Sera is kind of a trouble maker in Heaven because quite frankly she finds is boring as can be so she jumps at the chance to be down here with the humans.  The cons: She is aware that Colin has been in love with her for his whole life and she is pretty sure she feels the same.  The twist:  Colin has no clue he is a demon, that Sera is an angel, the his siblings are trying to kill him so that he does't overthrow dear old Dad and become a ruler in one of the circles in Hell.  Oh and that after he touches his talisman and unleashes his full power that Sera will be lost to him forever.
Why did I love this book?  Let's see....it was a different type of romance than I have read before ( some of it reminded me of the Supernatural TV series, which I love). It was also pretty steamy. Like you could feel the chemistry between these two popping right off the page. There are some background characters but very few and they were well developed too. It was a very quick read but.....that may also be because I hated to put it down for any length of time.
I have to agree with some of the other reviews I have seen and say it would be a cool series.
Posted by April at 9:44 AM No comments:


Five years crawled by at a painfully slow pace for young vampire, Beth; each year more agonizing than the next. The powerful unyielding spell which masked Amon’s whereabouts showed no signs of weakening. Influenced by the binding ritual and Amon’s blood surging inside her, Beth will stop at nothing, and risk everything, to find him and turn the tables on Osiris, Isis, and Hathor. In foggy streets of London, lives are threatened by a new breed of hunter, and nothing is what it seemed. Beth once again finds herself surrounded by betrayal. In the midst of it all, she is forced to choose between Philippe and Amon – knowing that her decision will change one life forever. But whose?

My Thoughts: I love a good gothic vampire story. I had nit heard of this author prior to being offered an ARC copy to review. I read the first book in this series Immortal Kiss to get a feel for what the story was all about. I am a huge Anne Rice fan and these books did not disappoint. The story starts with Beth Ryan falling in love and moving in with Phillipe Delon, a vampire. She learns all about their existence and laws and how she has been linked to them by her family. The first story has a lot to process but it is done so well that you don;t even realize how intricate a story the author has weaved. The second book picks up 5 years later with Beth struggling to find the immortal who has forced her to be bound to him through a blood ritual. She must find him and by doing so ends up having to choose between him and the one she has been in love with for the last 5 years. I will not give too much away but it was a brilliantly written sequel with enough twists to keep it from being too predictable.

I was born and raised in Sunny San Diego, California. A creative writing class in junior high sparked my desire to tell stories; however, Anne Rice’s Vampire Chronicles was my true inspiration to sit down a write a novel. Interview with the Vampire was published in 1976 and has gone on to become one of the best-selling novels of all time.After reading the chronicles of Vampire Lestat, the driving passion to write my own vampire legend tingled in my fingertips. In 1996, I completed and copyrighted Immortal Kiss. It sat patiently on a shelf for 14 years. In 2010, while packing to move, I stumbled upon it tucked away in my closet. I dusted it off and sat down to read. I fell in love with the story all over again; though, being 14 years old it needed some modernizing. I set forth on the journey of reviving Immortal Kiss. In 2013, 3 years later, Immortal Kiss was off to the publishers and agents. In 2014, it found a home with World Castle Publishing, and 1 year later, Immortal Kiss, was hot off the press and available to the public. Currently, I am modernizing and reviving its sequel, Bound By Blood, that I completed and copyrighted May 2001.Other completed works in the queue to modernize and revive are The Vampire Within (2004), A City of Vampires (2007), and The Soul Collector (2010). Future works for creation are The Ten, The Old Ones, and Vampire Amon. When I'm not writing, I hang out with my 5 Basset Hounds, Edie, Lucy, Stuart, Morgan, and Dexter. I love pizza and shoes. Can't live without either.

Deserted on his wedding day and left to raise triplets alone, Houston Maloney leaves his heart behind at the altar. Focused on his car restoration business and his three little ones, he’s made it through the terrible twos, and tougher threes with the help of Godmother extraordinaire, Liv Cole. When his fiancée Rain ran off with Liv’s boyfriend, Anthony, the two find themselves equally betrayed. While dealing with the aftermath, they form a strong bond. When a fire forces the feisty, independent, Liv to seek shelter in the Maloney home, the best friends begin to see what’s right in front of them. The passion flows naturally but their progression is hindered by past scars. Can they recover from loss and heartache to try again for love?

Shyla Colt is the sassy international bestseller of the popular series Kings of Chaos and Dueling Devils M.C. This genre-hoppers stories feature three of her favorite things: strong females, pop culture, and alternate routes to happy ever after. Listening to her Romani soul, she pens from the heart, allowing the dynamic characters, eccentric interests, and travels as a former flight attendant to take her down untraveled roads. Born and raised in Cincinnati, Ohio, this mid-west girl is proud of her roots. She used her hometown and the surrounding areas as a backdrop for a number of books. So, if you’re a Buckeye, keep an eye out for familiar places. As a full-time writer, stay at home mother, and wife, there's never a dull moment in her household.She weaves her tales in spare moments and the evenings with a cup of coffee or tea at her side and the characters in her head for company.You can interact with Shyla Colt online via her websitewww.shylacolt.com on,

Steady by Danica Avet. Book 1 of the Band Nerds Series

This is gonna be one of my bigger posts simply because I am just so excited to share this new series with you. I also have some pretty cool extras to share (such as a playlist and an interview with the author) in addition to my review. ***I was given a copy of this book in exchange for my honest opinion***

Everyone may call me “Steady” but recently my life has been all chaos. I went from Shaun Decker, NFL star, to being forced to retire and finding out my wife’s having an affair. Coaching for the Sauvage Spartans' football program will be perfect for getting my life back on track. Then a delicious woman named Katie literally falls into my lap and then, after the best sex of my life, disappears.
I’m Katherine Frost, band nerd turned band director and, oh, apparently a magnet for married men. Discovering I’m the other woman already had me rethinking my life, then my one-night stand turns out to be married too. Gah! I want nothing to do with men ever again. Especially tall, handsome, bearded men named Shaun. I thought taking up a teaching position at Sauvage State was a strategic exit, stage left, but it’s looking more like going from the frying pan into the fire.
Hey, Shaun again. Don't let her kid you. Fate puts people in the right place at the right time because they're meant for each other. Football and marching bands go together, just like me and Katie. I just need to convince her of that.

Added songs:
Gerry Rafferty "Right Down the Line"
Gordon Lightfoot "If You Could Read My Mind"
Last Night "Stressed Out"

My Thoughts on the Book:

The story opens with Kate Frost living in Chicago and wildly in love with her boyfriend of 3 years, Adam. He is a successful business owner who has spent quite a bit of time away on meetings with clients. It has been working well for them because Kate is always busy as a music teacher at a very prestigious school.  She is so happy with her life until a shopping trip the next town over leaves her reeling.  Adam has been married their whole relationship and his has a son with another baby on the way. Pretty shitty right? Not only does she literally run in Adam and his happy family but it is also witnessed by the one staff member she hates more than anything at her school. Did I mention she works a very conservative, religious school? Yep and they fired her while she was down and out.

Then you get to read Shaun Decker's back story. Super hot ex-NFL player who was forced into retirement by a leg injury.  He was living the kind of life most guys wanted...hot career, tons of money, and a gorgeous wife.  But wait for it....he is in the middle of a meeting with his agent trying to figure out his next move when a friend texts him a picture of his wife all over the newest guy on his team.  The new guy also happens to be his direct replacement.  Now he is forced to find something else to do with himself.

Both Shaun and Katie end up teaching at Sauvage State and when they meet the fireworks go off!  I loved the refreshing down to earth tone the writer uses in this story.  The characters are totally relatebable, funny, and charming.  The storyline was so good. I think this is one of my favorite stories I have read so far this year!  I am too excited for the rest of this series to come out.  FYI...the chemistry is off the charts between these two. I am not going to give away the story but trust me it is a worthwhile read!