Mistletoe, Mischief, and the Marquis by Amelia Grey 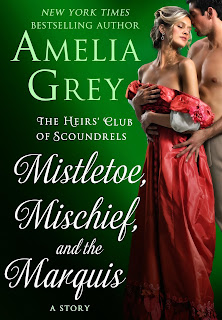 The Marquis of Wythebury, is expecting an ordinary Christmastide at Hurst—until he is set upon by a beautiful miss who takes him to task for not allowing his young nephews to play outside.  In his mind, a five and seven year old needn’t get chilled in the snow; better to plop them in front of the fire with a book. Few people have ever been brave enough to challenge him over anything, much less the rearing of his wards. The cheeky Miss Prim has no such compunction. No matter how fetching he finds her, he can’t give in to his attraction…for she is the sister of his best friend.

Growing up the middle child of five rambunctious girls, Lillian Prim doesn’t understand why two young boys visiting Hurst don’t know how to play until she meets their dashing guardian. The Marquis of Wythebury is commanding and intensely serious-minded. To her surprise, she’s captivated by him. It’s all she can do not to give into her feminine fantasies about him kissing him. Lillian has no intention of falling in love with the Marquis, but she will create Christmastide mischief and teach the boys and the handsome Marquis how to play.

***I received an advanced reader copy of this in exchange for my honest review.***

I have not read the other books in this series but I plan to now.  I love Christmas settings for romances.  It just makes it that much more romantic.  Lillian is exactly what I like in a heroine.  She is beautiful inside and out as well as full of fire and spunk.  The Marquis is devastatingly handsome and, of course he is arrogant.  The chemistry and word play between these two make this quick paced story so much fun to read.  I love the nephews and there excess amounts of energy.  Overall it was just a great book.

I have already recommended it to several friends and will be giving it 5 stars on Goodreads. 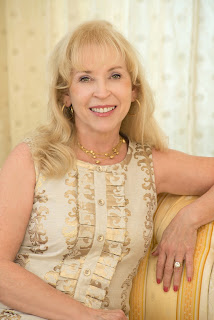 New York Times and USA Today bestselling author of over thirty books Amelia Grey read her first romance when she was thirteen.  She’s been a devoted reader of love stories ever since.
Amelia has been happily married to her high school sweetheart for over thirty-five years and she lives on the beautiful gulf coast of Northwest Florida.
She is a two-time winner of the prestigious Booksellers Best Award, and she has also won the Aspen Gold, and Golden Quill awards. Writing as Gloria Dale Skinner, she won the coveted Romantic Times Award for Love and Laughter and the Maggie Award.  Amelia’s books have been published in Europe, Indonesia, Turkey, Russia, and Japan.  Several of her books have been featured in Doubleday and Rhapsody Book Clubs.
Mistletoe, Mischief, and the Marquis is a spinoff Christmas novella from her widely acclaimed “Heirs’ Club of Scoundrels” Series.  Coming March of 2017 Amelia starts a new series, The Rakes of St. James with the first book of the trilogy, Last Night with the Duke.
You can email Amelia at AmeliaGrey@comcast.net
Follow her on FaceBook at FaceBook.com/AmeliaGreybooks, or visit her website at AmeliaGrey.com