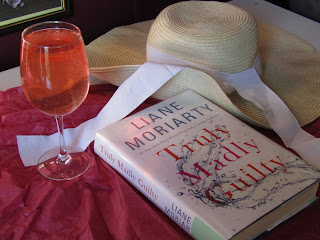 Wednesday came too soon this week.  I had plans for the holiday weekend but to say they went well would be a gigantic lie.  I had planned a 2 day camping trip to a state park in PA that we had never been to. I had my book all picked out to take with me and I was feeling particularly stoked about spending less money than these trips usually cost us. My version of camping is to explore during the day, spend late afternoon reading, and roasting marshmallows by the fire at night. None of this happened! The trip there was 3 1/2 hours of nothing but windy country roads. Seriously, I felt like I was on a roller coaster. I have never been car sick a day in my life but this trip had me feeling nauseous for sure. The road to the campsite (which was on top of a very steep mountain) was loose gravel and only suitable for 1 vehicle at a time. Did I mention we were very high up in the mountains and the roads were narrow and WITHOUT any guardrails? Upon reaching said campground we discovered that all the tent sites were literally inches apart. Ours promised it was by the water. We had a swamp. Don't get me wrong there was a very large creek nearby but it could be heard instead of enjoyed because of all the people. We passed a few places at the bottom of the mountain that sold firewood but we decided to set up first and then go back for the firewood.  This was a huge mistake. It turned out that it was another 15 miles uphill to get to our spot and it took 40 minutes to get there.  Needless to say, after our disappointing site was revealed we had to drive all the way back down to get the stupid wood. We only stayed overnight because we were both so stressed out on the way there it would have been a nightmare to make our way back out of the forest in the dark. Oh and the best part.....the road destroyed my muffler so now it sounds like I am driving a jet. Screw you tiny PA state park!

However, we came home early Sunday morning and the rest of our weekend was amazing.  We grilled and relaxed by our own fire pit. I got my read on (see pic above) and it was fantastic. Truly, Madly, Guilty by Liane Moriarty is just one of the books I am in the middle of.  I am also finishing up Ash and Quill by Rachel Caine ( more on this will be posted tomorrow). I didn't get any ,movie watching in but I did discover a couple of new series that I plan to check out. The first is Daytime Divas. It's about a popular daytime women's talk show with co-hosts Maxine, Nina, Mo, Kibby , and Heather. They discuss the same types of things you would expect from a talk show but behind the scenes is a world full of drama.  It's based on a book called Satan's Sisters by Star Jones.  It features Vanessa Williams, Tichina Arnold , and a few other familiar faces.  You can find this on VH1 on Mondays at 10 pm est. The next one premiers on July 10th on TNT. It is called Will and it is a modernized, steam punk version of the life of William Shakespeare in his early 20's and his rival Christopher Marlowe. TNT is airing the first 2 episodes on the premier night. I love Shakespeare and look forward to this series, especially since Jamie Campbell Bower will be playing Marlowe.
Posted by April at 12:07 PM