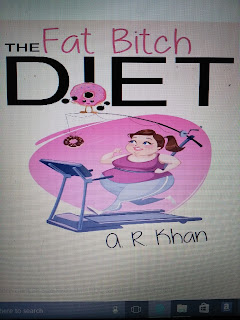 *****I agreed to voluntarily read this book and give my honest opinions.*****

Viola Ginamero has life but the tail.  She has had the greatest boyfriend, Franklin, for the past 9 years and just knows he is gonna propose anyday. Her best friend Shaniqua and her have been working at The Protein Hut in perfect unison forever and she has an amazing video channel.  Then the unthinkable happens and in the middle of her day Viola hears her beloved tell the entire world that not only does he not want to marry her but he refers to her as a "Fat Bitch".  Just like that her whole world starts to spin out of control.  She then decides to lose weight  and get Franklin back and a proposal to boot.

This was a fairly decent read but a slightly difficult one for me.  I actually found Viola to be disgusting and annoying in some scenes. I also felt that Shaniqua was unnecessarily ghetto at times.  However, the story of redemption and perseverance was pretty a compelling one.  I really liked the secondary characters that became like Viola's family and how they supported each other. I only gave this a 3 out of 5 on Goodreads and Amazon. However, I believe it is the beginning of a new series and the book got so much better by the end that I would read part 2.
Posted by April at 7:26 PM