Love and Other Consolation Prizes by Jamie Ford 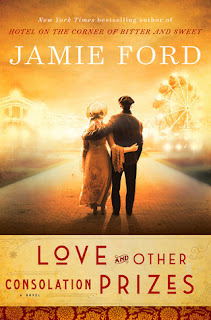 From the bestselling author of Hotel on the Corner of Bitter and Sweet comes a powerful novel, inspired by a true story, about a boy whose life is transformed at Seattle’s epic 1909 World’s Fair.For twelve-year-old Ernest Young, a charity student at a boarding school, the chance to go to the World’s Fair feels like a gift. But only once he’s there, amid the exotic exhibits, fireworks, and Ferris wheels, does he discover that he is the one who is actually the prize. The half-Chinese orphan is astounded to learn he will be raffled off—a healthy boy “to a good home.”The winning ticket belongs to the flamboyant madam of a high-class brothel, famous for educating her girls. There, Ernest becomes the new houseboy and befriends Maisie, the madam’s precocious daughter, and a bold scullery maid named Fahn. Their friendship and affection form the first real family Ernest has ever known—and against all odds, this new sporting life gives him the sense of home he’s always desired.But as the grande dame succumbs to an occupational hazard and their world of finery begins to crumble, all three must grapple with hope, ambition, and first love.Fifty years later, in the shadow of Seattle’s second World’s Fair, Ernest struggles to help his ailing wife reconcile who she once was with who she wanted to be, while trying to keep family secrets hidden from their grown-up daughters.Against a rich backdrop of post-Victorian vice, suffrage, and celebration, Love and Other Consolations is an enchanting tale about innocence and devotion—in a world where everything, and everyone, is for sale.***Courtesy of NetGalley***

This is the first time I have read anything by Jamie Ford but I plan to change this pretty quickly.  This book has so many layers to it that I am not sure how to begin. It is a romance, a drama, and a glimpse into American history in the early 1900's.  The book is based on the true story of a boy named Ernest who was raffled off at the 1909 World's Fair.

The story starts with a 5 year old half Chinese boy witnessing his mother commit a truly violent act.  The boy and his mother are starving.  She wants to give her son the chance to have a better life so she sends him to America with a group of human traffickers/slave traders.  Ernest finds himself on a boat with other Chinese and Japanese boys and girls on their way to be mail order brides, laborers, and some other very unsavory positions.  He meets the first girl he will ever love on this boat.  Once in Washington, Ernest finds himself bouncing from 1 boarding house to another. He has a benefactor at his last boarding house and he decides that he should ask her if he can be released to make his own way in the world.  She has other plans and Ernest finds himself at the 1909 World's Fair being raffled off like some sort of prize. He is taken in by a madame at a very high end brothel in the red light district.  Ernest begins to embrace and even love his new life as a driver for the house. He also has 2 girls that he has fallen deeply in love with.  Ernest, Fahn, and Maisie form an unbreakable bond that helps them navigate through some pretty tough scenarios.

This book is so well written that the reader begins to feel what the characters do as the author tackles tough subjects like human trafficking, physical abuse, mental illness, and prostitution.  The chapters are set up so that each one just about is set in a different time period ranging from Ernest in the present (1960's) to Ernest in his childhood/teenage years (1900's).  The fact that a lot of places and events in the book are real as well as the overall treatment of immigrants speaks volumes on the American mindset at the time. I enjoyed this book very much.  I actually plan to add a physical copy to my bookcase. My final thought: 5/5 stars.