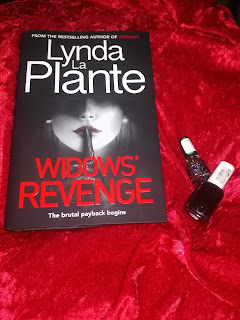 In the unputdownable sequel to Lynda La Plante’s revolutionary thriller Widows – now a major motion picture – we catch up with the four widows in Brazil after pulling off an incredible heist.
But the danger is far from over. Dolly’s husband, Harry Rawlins, is alive and well and looking to extract vengeance on his wife for cleaning him out and successfully carrying out the heist he so carefully planned. In Widows: Revenge love is war and scores must be settled.
After learning that her husband, Harry, has faked his own death, Dolly realizes that the widows’ dream of a new life with the money they stole is in peril. She knows that Harry will stop at nothing to find them and get the money as he chases them from Brazil back to London.
Widows: Revenge is a terrific follow up to a story that has enticed successive generations of readers since the series debuted in 1983. With the adaptation of Widows into a major motion picture, the story of these gritty and courageous widows lives on.

This is a sequel to the original book published in the 80's. If you haven't read the original than perhaps you saw the movie of Widows that came out last year. I did and it was phenomenal. I couldn't wait to read this second book and it was even better than I hoped. I quickly got lost in the story of these 4 widows all of whom are very different and the aftermath of pulling off one of the greatest heists ever. Dolly is the unofficial leader to the woman just as much as her husband Harry had always been to his crew. Dolly and the ladies end up in Rio trying to bid their time and clean the stolen money, not to mention hide from Dolly's husband Harry. He is a ruthless man who will do whatever it takes to get his hands on some money and since the widows stole his heist right out from underneath him that is the first place he goes looking. He tracks them down in Rio then back to London in the process he sets up a new crew to take on a job that will earn him more than 8 million dollars. The friendship and almost family like bond the widows have with each other is what makes the book so good. This is not a happy ending type book so don't go into it thinking it will be. It is pretty action packed and real page turner. I loved everything about it and now just can't wait for their to be more. There just has to be! Thanks to Bookish for the ARC for my review.
Posted by April at 8:25 PM