The Grace Year is a Fantastic Read and Her's Why..... 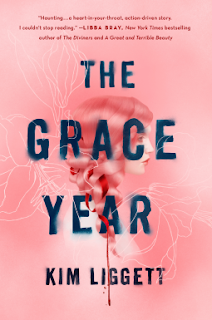 A speculative thriller in the vein of The Handmaid’s Tale and The Power. Optioned by Universal and Elizabeth Banks to be a major motion picture!
“A visceral, darkly haunting fever dream of a novel and an absolute page-turner. Liggett’s deeply suspenseful book brilliantly explores the high cost of a misogynistic world that denies women power and does it with a heart-in-your-throat, action-driven story that’s equal parts horror-laden fairy tale, survival story, romance, and resistance manifesto. I couldn’t stop reading.” – Libba Bray, New York Times bestselling author
Survive the year.No one speaks of the grace year. It’s forbidden.
In Garner County, girls are told they have the power to lure grown men from their beds, to drive women mad with jealousy. They believe their very skin emits a powerful aphrodisiac, the potent essence of youth, of a girl on the edge of womanhood. That’s why they’re banished for their sixteenth year, to release their magic into the wild so they can return purified and ready for marriage. But not all of them will make it home alive.
Sixteen-year-old Tierney James dreams of a better life—a society that doesn’t pit friend against friend or woman against woman, but as her own grace year draws near, she quickly realizes that it’s not just the brutal elements they must fear. It’s not even the poachers in the woods, men who are waiting for a chance to grab one of the girls in order to make a fortune on the black market. Their greatest threat may very well be each other.
With sharp prose and gritty realism, The Grace Year examines the complex and sometimes twisted relationships between girls, the women they eventually become, and the difficult decisions they make in-between.

***Thanks to NetGalley and St. Martin's Press for the ARC.  All my reviews are my own honest opinions of each selection.***
WOW!  I finished reading this ARC about a week ago and it has taken me this long to process all the thoughts and emotions running through as far as this book is concerned.  There are so many themes weaved together in that I am not even sure what to focus on for this review.  I refuse to ruin this for anyone with spoilers so I am just going to highlight a few key points/themes.

Tierney James is a 16 year old girl living in Garner County, where the women are taught to be docile and obedient to the men.  The men know what's best for everyone, especially the women which is why they have a grace year. The year the local girls turn 16 they are all banished to the outside of town to live in a camp together with no one else but each other for an entire year to rid themselves of their magic.  They must get rid of it so they can't lead men astray with their charms and persuasion.  Once the year is up any surviving girls are returned home to begin the rest of their lives as the perfect wives, mothers, or workers they are expected to be.  The main rule is literally....."what happens in Grace Year stays in Grace Year".  Unlike the rest majority of the girls, Tierney just wants to get it over and done with so she can find some sort of freedom by being assigned to work in the fields/gardens. Her best friend Michael changes all that for her in a second by forcing her to do the one think she never wanted to do.

During the grace year Tierney witness murder, torture, bullying, and some other very dark things.  She also uncovers some disturbing information about her town, friends, grace year itself, and her own family that changes her whole outlook on life.  The true test is simply surviving to see another day let alone a whole year.  All is not dark in this story though.  There are moments of real compassion, understanding  and even love.

This book is set to be released on October 8 and it's already been optioned for a movie (which will surely be amazing).  I give this one 5/5 stars because I found not one single thing I disliked or would change.