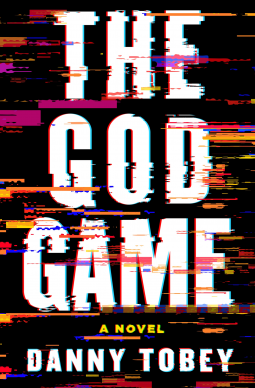 THE GOD GAME dives into our current obsession with the virtual world that games and technology provide and asks the question: what if your virtual life could affect your real life? And what if you can't escape it?
In the vein of Ready Player One and Black Mirror, THE GOD GAME is a chilling page-turner that will leave you questioning your own sense of right and wrong at the end.

"Smart, propulsive and gripping, THE GOD GAME is an ambitious thriller and a terrifying examination of what could--and probably already is--happening in the world of artificial intelligence."—Harlan Coben, #1 New York Times bestselling author of Run AwayA technological thriller with an all-too-believable premise, award-winning author Danny Tobey's The God Game follows five teenagers obsessed with an online video game that connects them to their worst impulses and most dangerous desires.
They call themselves the Vindicators. Targeted by bullies and pressured by parents, these geeks and gamers rule the computer lab at Turner High School. Wealthy bad boy Peter makes and breaks rules. Vanhi is a punk bassist at odds with her heritage. Kenny's creativity is stifled by a religious home life. Insecure and temperamental, Alex is an outcast among the outcasts. And Charlie, the leader they all depend on, is reeling from the death of his mother, consumed with reckless fury.
They each receive an invitation to play The God Game. Created by dark-web coders and maintained by underground hackers, the video game is controlled by a mysterious artificial intelligence that believes it is God. Obey the almighty A.I. and be rewarded. Defiance is punished. Through their phone screens and high-tech glasses, Charlie and his friends see and interact with a fantasy world superimposed over reality. The quests they undertake on behalf of "God" seem harmless at first, but soon the tasks have them questioning and sacrificing their own morality.
High school tormentors get their comeuppance. Parents and teachers are exposed as hypocrites. And the Vindicators' behavior becomes more selfish and self-destructive as they compete against one another for prizes each believes will rescue them from their adolescent existence. But everything they do is being recorded. Hooded and masked thugs are stalking and attacking them. "God" threatens to expose their secrets if they attempt to quit the game. And losing the game means losing their lives.
You don't play the Game. The Game plays you....

***Thanks to NetGalley and St. Martin's Press for the ARC.  All reviews posted to this site are my own, honest thoughts on the subject matter.***

I typically go through a few types of genre binges in the course of a year.  I noticed that the last few months I have been pretty interested in Sci-Fi, Techy type things.  I've even been watching shows on TV that fall in these categories a lot lately.  I read the description of this book and was so intrigued that I had to get my hands on a copy.  I really enjoyed this book despite my 3 star rating.   Why only 3 stars?  This is why:

1. I found the main characters, collectively known as "The Vindicators" to be pretty interesting but sometimes a little too much.  All the kids have some pretty heavy stuff happening in their home lives and being super into coding and computer tech is their main source of bonding and escape. I just found the language is a little heavy on the technical terms for me.  I know next to nothing about coding or computer programming so the references in different spots lost me.

2. Each chapter has it's own title but sometimes I felt like it was more distracting trying to figure out the relevance to the chapter than helpful.

3. I actually didn't like the ending.  Don't get me wrong, it wasn't a bad one but it was not what I was expecting.  Although, I think a lot of readers may find the ending to be perfect.  I am used to reading some of these books where the characters go on this journey to Hell and back and then everything works out to a sort of HEA ending.  This did not.  The individual endings for each character was a pretty realistic one.  They learned from their experience playing "The Game"and were living with their consequences.  This part was absolutely fine for me with the exception that it leaves it open for the possibility of a series.  This makes me mad because in order for the story to continue it will mess with more unsuspecting people and Charlie in particular.

I do think overall that the writing was pretty solid and the story line was unique.